Phoneutria, commonly known as Brazilian wandering spiders, armed spiders ("armadeiras", as they are known in Portuguese), or banana spiders (not to be confused with the relatively harmless Nephila), are a genus of defensive and venomous spiders of potential medical significance to humans. They are mainly found in tropical South America, with one species in Central America. These spiders are members of the Ctenidae family of wandering spiders,,,,,.....[] 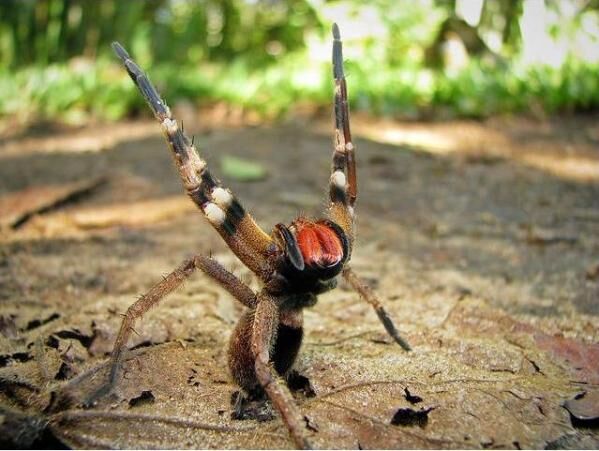 The genus Phoneutria (Greek for "Murderess") contains eight scientifically described species; the most notorious being P. fera and P. nigriventer. The spiders in the genus can grow to have a leg span of 13 to 15 cm (5.1 to 5.9 in). Their body length ranges from 17 to 48 mm (0.67 to 1.9 in). The genus is distinguished from other related genera such as Ctenus by the presence of dense prolateral scopulae (=a dense brush of fine hairs) on the pedipalp tibiae and tarsi in both sexes Phoneutria are easily confused with several other non-medically significant ctenids, especially Cupiennius, in which the recently described C. chiapanensis also has bright red hairs on the chelicerae. Additionally, some Phoneutria species lack red hairs on the chelicerae, making it an unreliable identification feature. The presence of a dark linear stripe or stripes on the frontal (=dorsal) palps and presence of a single thin black line running anterior-posterior along the dorsal carapace may help identify Phoneutria. Other useful features are the strong ventral marking on the underside of the legs with contrasting dark mid-segments and lighter joints, and the pattern on the ventral (underside) of the abdomen with several rows of black dots, or an overall reddish colour.

The characteristic defensive posture with frontal legs held high is an especially good indicator to confirm a specimen is Phoneutria, especially alongside correct colour patterns. During the defensive display the body is lifted up into an erect position, the first two pairs of legs are lifted high (revealing the conspicuous black/light-banded pattern on the leg underside), while the spider sways from side to side with hind legs in a cocked position.

Wandering spiders are so-called because they wander the jungle floor at night, rather than residing in a lair or

maintaining a web. During the day they hide inside termite mounds, under fallen logs and rocks, and in banana plants and bromeliads. P. nigriventer is known to hide in dark and moist places in or near human dwellings.

P. nigriventer mates during the dry season from April to June, which leads to frequent observations of the species during this time.

Phoneutria are found in forests from Costa Rica, and throughout South America east of the Andes into northern Argentina, including Colombia, Venezuela, the Guianas, Ecuador, Peru, Bolivia, Brazil and Paraguay. Three species (P. reidyi, P. boliviensis and P. fera) are found in the Amazon region, one species (P. fera) is restricted to the Amazon, and one (P. boliviensis) ranges into Central America in Panama and Costa Rica. The remaining species are restricted to Atlantic Forest of Argentina, Paraguay and Brazil, including forest fragments in the Cerrado savanna. In Brazil, Phoneutria is only absent in the northeastern region north of Salvador, Bahia.

Phoneutria has been introduced to Chile and Uruguay.

As of early 2012, this genus contains eight species:

P. fera and P. nigriventer are widely considered the most venomous species of spider. Its venom contains a potent neurotoxin, known as PhTx3, which acts as a broad-spectrum calcium channel blocker that inhibits glutamate release, calcium uptake and also glutamate uptake in neural synapses. At deadly concentrations, this neurotoxin causes loss of muscle control and breathing problems, resulting in paralysis and eventual asphyxiation. In addition, the venom causes intense pain and inflammation following a bite due to an excitatory effect the venom has on the serotonin 5-HT4 receptors of sensory nerves. This sensory nerve stimulation causes a release of neuropeptides such as substance P which triggers inflammation and pain.

Aside from causing intense pain, the venom of the spider can also cause priapism in humans. Erections resulting from the bite are uncomfortable, can last for many hours and can lead to impotence. A component of the venom (Tx2-6) is being studied for use in erectile dysfunction treatments.

The amount of P. nigriventer venom necessary to kill a 20 g mouse has been shown to be only 6 μg intravenously and 134 μg subcutaneously as compared to 110 μg and 200 μg respectively for Latrodectus mactans (Southern black widow). This ranks Phoneutria venom among the most deadly spider venoms to mice.

Phoneutria includes some of the relatively few species of spiders known to present a threat to human beings. Danger to humans is not merely a question of toxicity, but requires the capacity to deliver the venom, a sufficient quantity of venom, a disposition that makes a bite likely and proximity to human habitation. The actual incidence of death or serious injury must also be considered.

Spider mouthparts are adapted to envenom very small prey; they are not well-adapted to attacking large mammals such as humans. Some experts believe that various spiders like Phoneutria can deliver a "dry" bite to purposely conserve their venom, as opposed to a more primitive spider like Atrax that usually delivers a full load[citation needed]. A study in March 2009 suggests that Phoneutria inject venom in approximately one-third of their bites, and only a small quantity in one-third of those cases. Another study similarly suggested that only 2.3 percent of bites (mainly in children) were serious enough to require antivenom. However, other studies, as cited in the Wolfgang Bücherl studies, showed that the toxicity of Phoneutria venom was clearly more virulent than both Latrodectus and Atrax. Research in this area is hindered by the difficulty of identifying particular species. Nevertheless, there are well-attested instances of death. In one case, a single spider killed two children in São Sebastião. The spider was positively identified as a Phoneutria by Wolfgang Bücherl.

Despite their reputation as the world's deadliest spiders, there are multiple studies that call into question their capacity for fatal human envenomation, though some of these are labeled with a level of uncertainty, as Phoneutria are often confused with other genera of ctenids or the lycosids or other large labidognatha spiders. Of the eight described species, P. nigriventer and P. fera most frequently receive mention in mass-media publications. P. nigriventer is the species responsible for most cases of venom intoxication in Brazil because it is commonly found in highly populated areas of southeastern Brazil, such as the states of São Paulo, Minas Gerais, Rio de Janeiro and Espírito Santo. The species P. fera is native to the northern portion of South America in the Amazon of Brazil, Venezuela, Ecuador, Peru and the Guyanas.

The spider's wandering nature is another reason it is considered so dangerous. In densely populated areas, Phoneutria species usually search for cover and dark places to hide during daytime, leading it to hide within houses, clothes, cars, boots, boxes and log piles, thus generating accidents when people disturb it. Its other common name, "banana spider", comes from its tendency to hide in banana bunches or plantations, and it is occasionally found as a stowaway within shipments of bananas. These spiders can also appear in banana crates sent to grocery stores and bulk food centers around the world. One such instance happened in 2005 with a shipment of bananas arriving at Bridgwater, England, when a man was bitten by a P. fera; however, due to quick medical care he survived, taking nearly a week to recover from the bite following treatment.