Pholcidae, commonly known as cellar spiders, are a spider family in the suborder Araneomorphae.

Pholcids are fragile arachnids, the body being 2–10 mm in length with legs which may be up to 50 mm long. Pholcus and Smeringopus have cylindrical abdomens and the eyes are arranged in two lateral groups of three and two smaller median contiguous eyes. Eight and six eyes both occur in this family. Spermophora has a small globose abdomen and its eyes are arranged in two groups of three and no median eyes. Pholcids are gray to brown with banding or chevron markings. The shape of the Pholcus and Smeringopus's body resembles that of a peanut.

Pholcids are found in every continent in the world besides Antarctica where it is too cold for them to survive. They hang inverted in messy, irregular, tangled webs. These webs are constructed in dark and damp recesses, in caves, under rocks and loose bark, abandoned mammal burrows in undisturbed areas in buildings and cellars, hence the common name "cellar spiders". However, Pholcids are also quite commonly found in warm, dry places, such as household windows and attics.

The web has no adhesive properties but the irregular structure traps insects, making escape difficult. The spider quickly envelops its prey with silk and then inflicts the fatal bite. The prey may be eaten immediately or stored for later.

When the spider is threatened by a touch to the web or when too large a prey becomes entangled, the spider vibrates rapidly in a gyrating motion in its web and becomes blurred and difficult to focus on. For this reason pholcids have sometimes been called "vibrating spiders", although they are not the only species to exhibit this behaviour. Doing so might make it difficult for a predator to see exactly where the spider is, may be intended to signal an assumed rival to leave, or may increase the chances of capturing insects that have just brushed their web and are still hovering nearby. If the spider continues to feel harassed it will retreat into a corner or drop from its web and escape.

Certain species of these seemingly benign spiders invade webs of other spiders and eat the host, the eggs or the prey. In some cases the spider vibrates the web of other spiders, mimicking the struggle of trapped prey to lure the host of the web closer. Pholcids are natural predators of the Tegenaria species, and are known to attack and eat redback spiders and huntsman spiders. It is this competition that helps keep Tegenaria populations in check, which may be advantageous to humans who live in regions with dense hobo spider populations.

Pholcus phalangioides often uses an alternating tetrapod gait (first right leg, then second left leg, then third right leg, etc.), which is commonly found in many spider species. However, frequent variations from this pattern have been documented during observations of the spiders’ movements.

There is an urban legend stating that daddy long-legs spiders have the most potent venom of any spider, but that their chelicerae (fangs) are either too small or too weak to puncture human skin; the same legend is also repeated of the harvestman and crane fly, also called "daddy long-legs" in some locales. Indeed, pholcid spiders do have a short fang structure (called uncate). However, brown recluse spiders also have uncate fang structure, but are able to deliver medically significant bites. Either pholcid venom is not toxic to humans or there is a musculature difference between the two arachnids, with recluses, being hunting spiders, possessing stronger muscles for fang penetration.

In 2004, the Discovery Channel show MythBusters set out to test the daddy long-legs myth episode 13 - "Buried in concrete". Hosts Jamie Hyneman and Adam Savage first established that the spider's venom was not as toxic as other venoms, after being told about an experiment whereby mice were injected with venom from both a daddy long-legs and a black widow, with the black widow venom producing a much stronger reaction. After measuring the spider's fangs at approximately 0.25 mm (average human skin thickness varies from about 0.5mm to 4mm), Adam Savage allowed himself to be bitten, and reported that the bite produced little more than a mild short-lived burning sensation. This appears to confirm that, contrary to popular belief, pholcid bites can penetrate human skin but will deliver a harmless envenomation. Additionally, recent research by Alan Van Dyke has shown that pholcid venom is relatively weak in its effects on insects as well.

According to Rick Vetter of the University of California at Riverside, the daddy long-legs spider has never harmed a human and there is no evidence that they are dangerous to humans.

The urban legend ostensibly stems from the fact that the daddy long-legs spider is known to prey upon deadly venomous spiders, such as the redback, a member of the black widow genus Latrodectus. By extrapolation, it was thought that if the daddy long-legs spider could regularly kill a spider capable of delivering fatal bites to humans, then it must be more venomous, and the uncate fangs were accused of prohibiting it from killing people In reality, it is merely quicker than the redback. 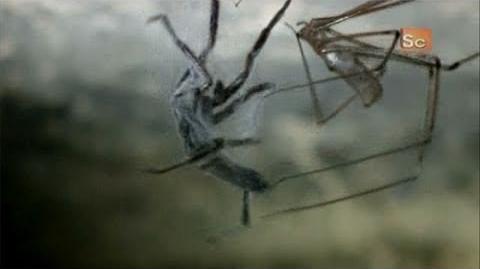