Theraphosa blondi is native to the rain forest regions of northern South America. Wild Goliath birdeaters are a deep-burrowing species, found commonly in marshy or swampy areas, usually living in burrows that they have dug or which have been abandoned by other burrowing creatures.

Females always mate, but sometimes may end up eating their mates. Females mature in 3 to 4 years and have an average life span of 15 to 25 years. Males die soon after maturity and have a lifespan of three to six years. Colors range from dark to light brown with faint markings on the legs. Birdeaters have hair on their bodies, abdomens, and legs. The female lays anywhere from 100 to 200 eggs, which hatch into spiderlings within two months.

These spiders can have a leg span of up to 30 cm (12 in) and can weigh over 170 g (6.0 oz). Birdeaters are one of the few tarantula species that lack tibial spurs, located on the first pair of legs of most adult males.

Like all tarantulas, they have fangs large enough to break the skin of a human (1.9–3.8 cm or 0.75–1.5 in). They carry venom in their fangs and have been known to bite when threatened, but the venom is relatively harmless and its effects are comparable to those of a wasp's sting. Also, when threatened, they rub their abdomen with their hind legs and release hairs that are a severe irritant to the skin and mucous membranes. They have urticating hairs that can even be harmful to humans, and are considered by some to be the most harmful tarantula urticating hair of all. Tarantulas generally bite humans only in self-defense, and these bites do not always result in envenomation (known as a "dry bite"). The Goliath birdeater has poor eyesight and mainly relies on vibrations in the ground, which it can sense from within its burrow.

Despite its name, the Goliath birdeater does not normally eat birds. As with other tarantulas, their diet consists

primarily of insects and other invertebrates. However, because of its naturally large size, it is not uncommon for this species to kill and consume a variety of vertebrates. In the wild, larger species of tarantula have been seen feeding on rodents, frogs, lizards, bats and even venomous snakes.

In captivity, the Goliath birdeater's staple diet should consist of cockroaches (generally the Dubia cockroach, Blaptica dubia). Spiderlings and juveniles can be fed crickets or cockroaches that do not exceed the body length of the individual. Feeding of mice is discouraged as such food contains excess amounts of calcium which can be harmful or even fatal to a tarantula. 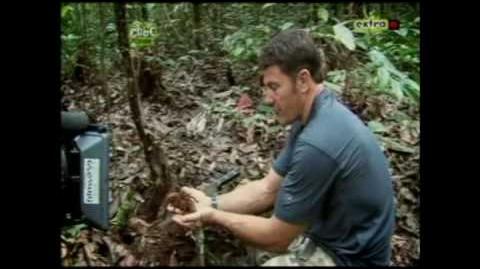