Edit
watch 01:36
We're Getting Mutants in the MCU - The Loop
Do you like this video?
Play Sound

the six eyed sand spider is one of the deadliest spiders in the world it can cause severe bleeding or even death.

The six-eyed sand spider (Sicarius hahni) is a medium-sized spider with body measuring 8 to 15 mm and legs spanning up to 50 mm, found in deserts and other sandy places in southern Africa. It is a member of the Sicariidae family; close relatives may be found in both Africa and in South America, and its near cousins, the recluses (Loxosceles), are found worldwide. Due to its flattened stance and laterigrade legs, it is also sometimes known as the six-eyed crab spider. Bites by Sicarius to humans are uncommon; there are no proven cases and only two suspected cases where the culprit was never identified. Sicarius bites have been experimentally shown as lethal to rabbits within 5 to 12 hours. The genus name Sicarius is Latin for 'murderer', from sica, a curved dagger. The species was named after Carl Wilhelm Hahn.

This spider buries itself in the sand and strikes from ambush at prey that wanders too closely. Sand particles adhere to cuticles on its abdomen, thus acting as a natural camouflage if uncovered. If disturbed, it will run a short distance and bury itself again. The six-eyed spider has a poor sense of direction, unlike other species of spiders.

The Six Eyed Sand Spider is covered in small hairs called setae (a stiff hair, bristle or bristle-like process or part of an organism), which serve to hold particles of sand. This provides effective camouflage even when the spider is not buried.

Toxicology studies have demonstrated that the venom is particularly potent, with a powerful hemolytic/necrotoxic effect, causing blood vessel leakage, thinning of the blood and tissue destruction. Sicarius bite treatment should be directed, as with all cytotoxic bites, at prevention of secondary infection and combating Disseminated intravascular coagulation if it develops. No anti-venom exists for it. 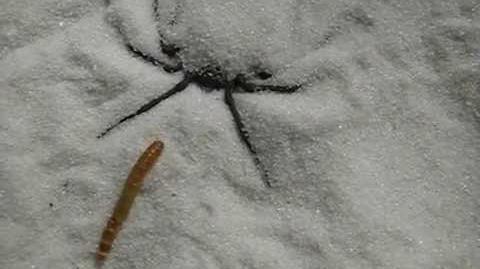